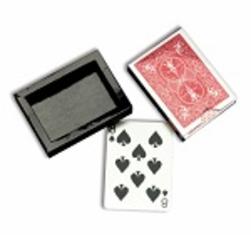 This special card case can make a deck of cards disappear. Look through the window and it looks like a full-sized deck, but when the deck is removed and put back into the case, it instantly vanishes!  Very easy to do, but extremely effective.

(Product may vary slightly from illustration.) 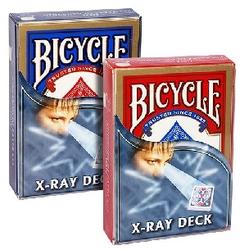 This is a brand new gimmick deck that will even fool some magicians.  The performer hands half a deck of cards to a spectator and keeps the other half for himself. He turns his back to the spectator, and asks him to freely pick any card among the cards that he has been given, remember it, and then slide it back anywhere among the magician’s cards. Once this is done, the magician turns around again, and without any suspicious moves, names the spectator’s card!  Easy to do and a great impact on any kind of audience.  The poker size deck takes advantage of a very ingenious system.   I'll explain my method and technique with each purchase--- you'll be up and running with this great trick in just minutes.  Available in red or blue back cards. 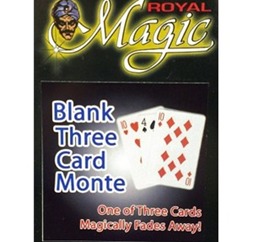 NEW == >>   BLANK THREE CARD MONTE                     Level:  Beginner
Three cards are shown to the audience.  A spectator picks one of the cards, places it face down (even in someone's hand !!!), and the printing on the card suddenly disappears--- the card becomes completely blank.  Supplied with special cards--- you can perform this trick like an expert in just minutes.

(Also available:  Regular Three Card Monte---  The selected card does not turn blank, but turns into a completely different card--- even in someone's hand !!! 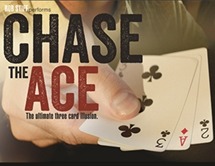 I perform and teach many other card tricks, and I will list them here in the coming days.  Please check this site often for updates.

I attempt to meet (and usually beat) the price of any NYC retail magic store, plus I take the time to teach you how to do every trick that I perform.  In addition, I can supply you additional copies of each trick so that you can teach and share with your friends and family, and multiple copies of the same trick are offered at substantial discounts.

One of the great "tricks" of magic is to make the observer think that he or she is controlling the trick.  In fact, the skilled magician is always in control of the trick.  I will teach you how to prevent your audience from "getting ahead of you" with some clever lines and moves you can use to disarm your audience.

CHASE THE ACE  (PICK IT OUT)

This is my favorite card trick and it only involves three cards.  This trick requires a little practice and skill, but the payoff is worth it!  I carry this trick wherever I go, and everyone is always astounded.  You show three cards, an Ace, a Two and a Three, and place them next to each other,  face down on a table, showing the viewer where each card is going.  You as the viewer to point to the Ace, but when you show the cards, the Ace has suddenly jumped to a different position.  You repeat the process, but the Ace has jumped again.  Finally, you put the Two on the table and clearly show the Ace and the Three in your hand.  You ask the view where the Ace is--- when they say it is in your hand, you reveal the two cards in your hand--- the Two and the Three--- the Ace has jumped down to the table.   This trick comes with your three cards, a carry case, a reference booklet and a training DVD.  I will also give you personal instruction and tips on doing the trick, but it does require a little practice on your part.  The trick  requires easy setup ahead of time and is quickly repeatable.

This is another of my most popular and easy to do illusions, and is also one of the deck of cards that I supply in my "Introductory Special".  As with most other decks, there are several variations of this trick, but essentially the magician produces an apparently normal deck of 52 cards, which he shows the observer.  The magician then ripples through the deck and the observer selects any card, views it, and returns it to the deck without revealing the card to the magician.  The observer is then told to tap on the deck, and the card has magically risen to the top of the deck.  A great trick in itself, but now, the observer is told to tap the back of the deck and suddenly, the entire deck has changed into the observer's chosen card.  The trick also requires no special setup ahead of time and is immediately repeatable, with certain caveats.

I will tailor a start-up magic program to fit your needs and comfort level.  I will thoroughly explain terms like "set-up", "immediately repeatable" and other terms so that you understand the nuance of every trick and illusion that I teach.  My lessons are all geared for beginner magicians, so everything is easy to do and requires very little or no special skills.

This is one of my most popular and easy to do illusions, and is one of the deck of cards that I supply in my "Introductory Special" described elsewhere on this website.  If you have seen me perform, this is likely the first trick which you saw me do.  There are several variations of this trick, but essentially the magician produces a deck of 52 cards, but what is immediately evident to the viewer is that while the cards all have normal backs, the fronts (or faces) of the cards are all blank.  No numbers, no suites, no Kings or Queens--- just blank white cards.  The magician then ripples through the cards to show the observer that in fact all the cards have blank faces.  The observer than taps the back of the deck once or twice and the magician ripples through the cards again to show that all of the faces have magically appeared.  The effect is astounding.  You can end the trick right there, but if you want to go the extra mile, you can have to observer tap the back of the deck again and suddenly all the faces have suddenly disappeared again.   Every beginner magician (as most seasoned professionals as well) carry this special deck around with them in their jacket pocket because it is a quick and easy trick to do anytime, anywhere and for anyone, and it requires no special skills.  Your audience will be amazed every time.  The trick also requires no special setup ahead of time and is immediately repeatable.

(Newest additions are shown toward the bottom of the page.)

Variations of card tricks and illusions have been around for centuries.  Many card tricks can be performed using ordinary decks of cards--- these sometimes require variations of "card counting" and sorting techniques, or sleight of hand.  The card tricks that I teach and the decks that I supply generally DO NOT require any special training of sleight of hand, which makes them perfect for beginners looking to do and to perfect.  In fact, with my training, I can have you doing some great card tricks and illusions in just a matter or minutes.  And with a little practice and patience, you'll master them very quickly.  These tricks use special "gimmick" decks--- this means that the deck itself does most of the work in performing the trick.  Once you learn your ""patter", or banter (which is the magician's verbal delivery while performing the trick) you will be a real pro doing these illusions.  Below is a listing of some of the favorites that I teach and supply to you with your lesson.  Incidentally, many of these decks have various names assigned to them by different manufacturers, so for the most part, I am giving  you generic descriptive names.